Should I be looking for pairs of animals?

The area I live in may or may not have been on the national news. We wouldn't be able to tell since the cable has been out for days now due to the rain and the resulting floods in our area. Mr. Strong and I have had to get used to the lack of background noise. We've actually had to talk.

And the word is that the cable won't be restored for at least another week. Apparently, cable doesn't work well under water.

All over town, roads and bridges are closed. You might want to go right up the street to the grocery store but soon you find out that you are going to have to go around your ass to get to your elbow take a different route. 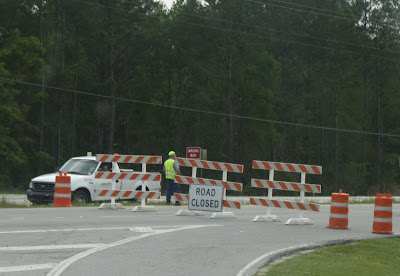 The water is so high in some of the drivable areas, you can barely see the tops of the utility poles. It is hard to imagine what the water is like in the areas where the roads and bridges are closed. 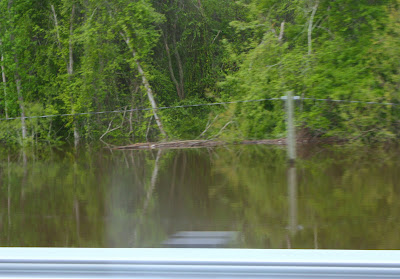 And still the rain is expected to fall. We've never had a flood to this degree in our town. Last night, some friends of ours told us that people were hanging out in lawn chairs at a particular cemetery. The flood waters had reached the burial grounds and they were waiting for the caskets to float up to the surface. How sad it would be to have your loved ones float down the river.

We took a drive to the cemetery. I just had to know that my father's grave site was not under water. It wasn't. Although, I'm not sure what I would have done if it was. 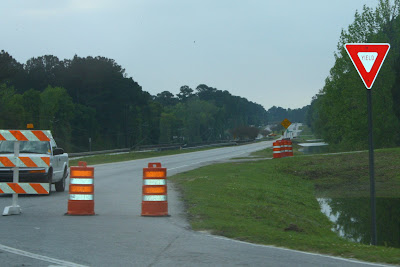 We'd been going by one of our friend's house for the past couple of days to check on him. The backyard had slowly been claimed by the river. When we went today, our hearts sank. You can't even get into the driveway enough to see the house unless you use the canoe.

Surprisingly, I was moved to tears. I've always felt bad for the displaced natural disaster victims I've seen on the news but it just struck a chord for it to be someone I know who lives just a few blocks from me. 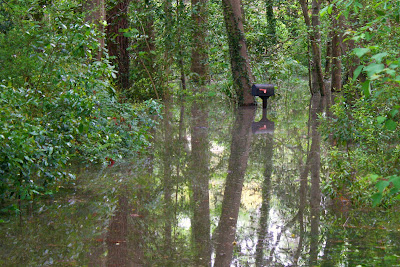 The house has been in this cool ravine for 40 years and never experienced a flood. Now, there is about 10 inches of water inside the house. The river is expected to rise 12 to 24 more inches. And there is still the rain that keeps coming and going. There are some houses in the area that are basically completely submerged.

At least we have an apartment in our backyard that is currently being used for storage. It'll make a great home for our friend while he renovates his house. 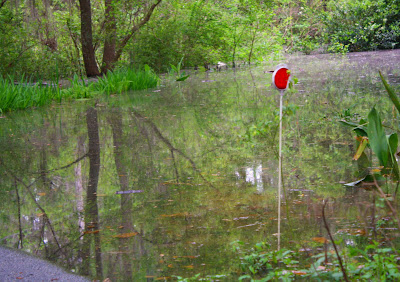 I guess this means the drought is over.

Labels: damnit for him not having flood insurance, flooding rivers, maybe we should build an ark

Without cable for a whole week?!?!?! I hope you survive.

wow, I'm so sorry! You have certainly captured some great pictures of it.

Yowza, woman. Is your place on high ground?

It's supposed to SNOW here on Tuesday. *sigh*

Kristina - It has been awful. The quiet makes the voices in my head louder. Hold me!

Jan - We aren't in any danger of flooding. Our fountain, however, has seen better days. You could say "its cup runneth over."

Oh MY Beth, I am so sorry to be reading about the flood. I am here via Pearl's blog. I saw you had no cable due to water. I was wondering why and where you were. Again so sorry to hear and yes it is amazing to think how high water can go and go where it's never gone before. I am from Mississippi, ground zero for Katrina. So, just wanted to come by show some support for knowing what you are going through, and will continue to go through for a while. Take Care

And Jan - I'm cringing while I'm typing this, but I'd rather have the snow than all this flooding. Dang it. Now I need to go knock on wood.

darsden - Thanks for your support. Trust me when I say our flood is small potatoes compared to what Katrina did to you guys. Still, I appreciate the concern.

I'm so sorry to see/hear this. I cross the Mississippi twice a day (mpls) and have been watching the water rise, trying to imagine what it would be like to see that coming up the yard. I can't. I hope your friend gets cleaned up. Maybe you could hold a fundraiser online... There are a lot of people who would donate something knowing who it goes to, you know?
Pearl

Our place gets flooded annually; 6 to 8 foot floods, often higher...i know how you feel...

I am sorry to hear and see this. I think that it's really great that you have an extra apartment so that this friend can stay with you while he gets his place cleaned up. That's really cool!

Wow - that is a lot of water. We had no power for five days this winter because of an ice storm. It was torture! You should definitely start building that ark!

Why does it have to be this way. Drought or flood? UGH! I'm so sorry for your friend and hope you stay high and dry. I'm not sure where you are in Ga. but my daughter is in Tallahassee and was complaining of rain for days on end. Your friend is very fortunate to have a friend in you.

That's a ton of rain. I hope it stops soon so that you all can begin the drying out process.

Pearl - Interesting idea about a fundraiser online. We are going to be helping with several local fundraisers. Thanks for your kind words.

Braja - Every year it floods? Wow! I'll quit complaining. I don't know how you handle that.

Smiles4u - We love that little 300 square foot apartment in our backyard. I'm really excited that he'll be able to use it. We just feel so helpless.

Laura - No power for 5 days!? Check out the maternity wings in 9 months. I'll bet there will be a boom.

Smart Mouth Broad - We are not far from Tallahassee. They've had a lot of flooding there, too, from what we hear. It has been hard not having the local and national news. I hope your daughter is on high ground!

Candice - We are down to a 30% chance of rain. I'm keeping my fingers crossed.

Have been watching this on the news as still have family in Savannah and many friends. So sorry you're having to experience this but am so glad that you're there to help your friend with your apartment!

Holy crap! That just looks so unpleasant. I can't imagine what it is really like. Hang in there.

Very scary stuff Beth. Hope you golks catch a break and get some sun soon. Will be sending thoughts your way.

Sorry! And you definitely made a 30 second sound bite on the evening news. Then, onto Obama's overseas trip. While the cable is out try Dexter from blockbuster. You will not regret it!! Awesome dark comedy about a serial killer. Trust me. Very funny.

I'm no medical professional, but I think floating caskets (aside from the creepiness) is unsanitary. But i'm just guessing.

you should move. God is smoting you. (Selfishly, I'm just happy it is not me.)

The Nice One said...

WOW! That is crazy weather...

How horrible! I will add you to my list of bloggy friends and others I pray for every night. You are a great person to let your friend stay on your property when he starts renovations.

Those photos are gorgeous. Hope you guys get cable back! and stay dry!

Goodness what a mess. I don't get to watch the news much so I had no idea this was going on. Hope it clears up soon.