If you read it on a blog, it is true. Right?

Yesterday, my husband and I went to help tear up move the rest of our friend's stuff. We'll refer to him as Single Guy. While he is a great friend, trust me when I say there is a reason he is in his mid-40s and still single.

As we walked through the small pond that is his front yard (and yay for being able to drive into the driveway), I noticed this worm in the water! 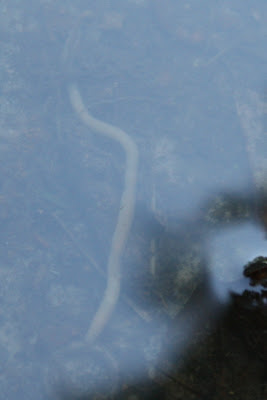 Holy Schnike! Could this be one of those burrowing worms that my friend Michel from Facts are Strictly Optional warned me about? Michel is in Sudan (you know, that country in Africa) and not only is she fighting to avoid Lassa Fever there are worms that will burrow in your skin as you walk on the dirt roads.

Seriously, go read what Michel is up to these days. If she doesn't make you laugh then I'll refund your money because seriously you must need it for the therapy you are skipping out on. She is THAT funny!

As I was trying to figure out what to do with the six seven eight nine remote controls and the friggin equipment that went with them, the guys were ripping out the floor so the sub floor beneath could begin to mold and rot dry. All of a sudden I heard Single Guy say, "I got it. I killed it." 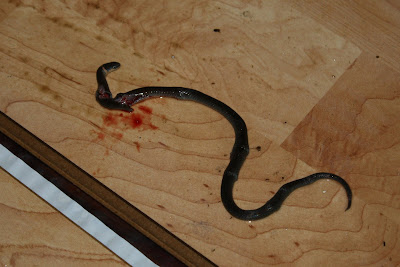 The dead snake reminded me of a story my friend Jane from Gaston Studios told us about recently. Did you know snakes are still poisonous even after they are dead?! Bet ya didn't know that but you should have because poisonous snakes are godless killing machines (thanks for that phrase, Michel. It has come in handy lately. So go check Jane out. She is just full of important facts like that.

A Jay and Deb Production.

A quick note to say thanks to all who expressed concern about our flood (apparently God is smoting us as Michel pointed out earlier). While the cable hasn't yet returned and we've had to succumb to playing Trivial Pursuit, the water is now receding and the town is beginning the drying out process.
Posted by Beth at 7:10 AM

Thank you so much Beth, for putting me in the same category as Michel (who totally makes me laugh out loud!) in your Tuesday Tribute!

As for more important matters.... Eweeeeewe, a burrowing worm and a godless killing machine all in one afternoon!

Thanks goodness the waters have stopped rising and you can get Single Guy settled into your apartment (have you given this due consideration!). Hope the rest of the town will be as generous with their neighbors as you guys.

BTW, if you google 'dead as a doornail snake' your BLOG comes up at the top of the list!

I am impressed that you still have internet access. Are you using a cell phone plug in? I like your post today. I am guessing you are a little afraid of slimy crawlers? I am the official killer of all bugs and crawlers in my house. BRING IT ON!!! I have a post about all those toilet training bloggers today. I will put it up right now. Very funny. And shoot - I see a spider now crawling up the wall. Must kill.

Gaston Studios (AKA Jane) - But I love reading your stories. And you get my humor (which is probably scary come to think of it). Do that Google search again but under Google images. It is bizarre!

Hit40 - Our internet has worked most of the time because the service is with our phone company. The phone company is obviously smarter than the cable company because they built on higher ground. And as for the snakes and worms, I actually am not afraid of them. Bug, on the other hand, make me scream like a little girl.

poor snake just came out of hibernation for his first meal...dang! Pop got one those here last week too, trying to get a frog in the koi pond! He was able to save our big old frog! I cannot stand snakes or spiders but, I can't kill them I just shoo them away ;-)

Worms and snakes and doornails, oh my!

Hopping over to your tributed blogs, so I can do some smoting myself. :P

You guys with the snakes and worms and things freak me out. Please write about something less squeamish for us scaredy cats.
P.S. I'm Jane's (Gaston Studio) daughter.

I guess that is why they tell you not to get in flooded water - eeks on the snake, but the worm is pretty nasty too! Glad to hear the water is leaving.

EWWWWWWW...I absolutely hate snacks. I bate my own fishing hooks with worms and minnows, but you can bet your boots, I will NEVER touch a snake. Hope your cable turns on soon...although, I would be in heaven if there were no TV at my house...well, except for Idol and Dancing..and Hell's Kitchen...lol

You are hilarious. Worms and snakes and remotes, oh my!

WOW! Thank you! that was nice...however, now I'm all ascared to write anything because there is simply too much pressure. I was previously devoting most of my waking hours to winning the blog commenter contests - now I'm going to have to defraud the USG and smuggle in my laptop to continue my efforts.

And OMG...that was hideous! I think I told you this before: YOU NEED TO MOVE.

First the snakes (and frankly, worms are just snake-wannabe's...they'd kill you if they could), next the locusts -- and that water looked pinkish to me.

Smoted. Better you than me. I gots me some creepy shit here. I can't risk it. I likes me better!!

Ewwww, that snake kind of looked like that worm. Either one of them would have sent me screaming like a girl! : )

Hope the water isn't too much of a hassle. Off to check out blogs. Thanks for the tips on some new blog reading...

Ew .. That creepy crawly business is not for me. You're a good friend to help out though! :)

darsden - I actually like snakes. But not in my house. Shooing them away is a good plan.

Jan - You weren't disappointed, were you?

Dee-Zigns - I love your mother! She is such an encourager!

Laura - I think they are more worried about the raw sewage than the snakes. I'd rather deal with a snack than stranger poo.

Michele - Trust me when I say that worms are yuckier than snakes. Snakes really aren't slimy.

Wendy - Single Guy has more remotes than my husband. But that is another blog post for another day.

Michel - With Passover coming up, maybe I'll just paint the doors of my home with a sacrifice. I don't want to move!

Christine - Glad to have the opportunity to meet you. Sorry to gross you out. You should have heard the stories I could tell when my children were still in diapers.

Sarah - I grew up spending summers on my grandparent's farm. There was no screaming allowed (a rule from my grandmother). So, I guess they toughened me up a bit. But put me in the same room with a mouse or a roach. I can't supress the scream.

only a movie - Erin, the water is finally going down in most areas. There are still some other rivers rising that are threatening to close some major interstates. It could have been worse. A house is a house and can't replace a life.

Crazy Charm - Single Guy has been a friend of mine for longer than I've known my husband. We actually used to hate each other before we realized we had some things in common. He is a good guy and I know he'd do the same for us (but hopefully we'd never need the help).

What a great tribute. Thank you also for the pictures. lol. Who knew that snakes had so little blood?!? Checking out those blogs now

I love Michel and Jane too. And am I the only one who was surprised that snakes bleed red? I thought it would be green slime or some such goop. I cut off one's nose while gardening once and you couldn't shut me up about how it had red blood. Well, after they woke me with the smelling salts that is.

Oh man that gave me the willies! I don't like snakes at all! shake it off, shake it off... whew, it's ok, I'm alright now.

Great tribute! And thanks endlessly for making my skin crawl and the bile rise right after lunch.

Alisha - I really hadn't thought of snakes not having much blood. Now that I think of it, it doesn't take much for them to bleed out (loss of head aside).

Smart Mouth Broad - Hmmmmm... I've never thought about snakes bleeding a different color. Sounds like a blog post you could write about.

Pseudo - I aim to please.

Yeah I'm Still Here - But I do LOVE that snakes eat mice. Sorry to scare. We have a lot of snakes in south Georgia. This one was really just a little thing.

Sassy Pants - I recommend drinking a strong drink tonight. It will either get rid of the nightmares or make them more colorful.

Halftime Lessons - At your service. Made you step away from the dessert, didn't it?

Ugh...I work 6 days in a row and ungodly hours at that...and look what I miss! I didn't know about your flood...I'm so sorry that it got you. I'm glad the snake didn't! Great post...I swear you get funnier every week...hmmmm are you taking roids????

What a great tribute to your bloggy pals! That picture of the broken snake just about broke my heart (the worm, not-so-much!)