A couple of weeks before Thanksgiving, while on a random late Sunday morning run, a dog bounded out of nowhere and tackled me.  At first it scared me and I screamed like a girl when she knocked me down.  But all she wanted to do was lick my face and play with me.

Poor pup.  She didn't have a collar.  Her ribs were showing.  Her skin looked like a mangy mess.  She had scabby sores on her shoulders from some type of injury.  She was just a mess.

I got up to begin running again not sure what to do about the dog.  Where were her owners?  Where had she come from?  Why was she following me?

We named her my most expensive run ever Clementine. 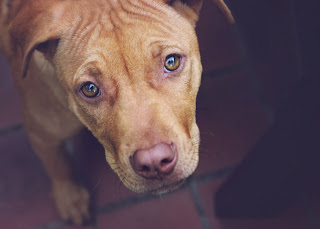 For the record, the Supreme Leader is displeased.  But Clementine is a smart girl and gives the little tyrant a fairly wide berth except when she periodically pounces on her just to drive her ape crap crazy.

Last night, during the middle of the night, Clementine used her nose to slide the latch from her kennel open then stealthily opened the door.  She quietly creeped across the floor and slowly approached the foot of the bed.  She put her nose under the comforter and calmly climbed up into the bed.

As she lay curled up near our feet, I reached down to pet her.  All the while my mind was wildly racing.  Do I let her stay in the bed?  Will Mr. Strong notice and if not can I just sleep on and ignore her presence?  Will I lose my status as alpha dog bitch trainer if I let her stay under the covers?

Suddenly, Mr. Strong rolled over and asked, "Are you ok?"

Not being able to contrive a story on the spot, I blurted out, "Clementine is in the bed with us."

Very calmly, he said, "Honey, that is my leg you are petting."

Instantly, I realized I had been dreaming.  The poor man probably thought I was trying to be amorous.  I laughed and then realizing I didn't have a dog to move, rolled over and went back to sleep.
Posted by Beth at 11:16 PM

oh, that is too funny! i bet you got some good giggles out of that the next morning! : )