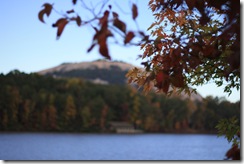 After spending a weekend with my extended family for a wedding, I couldn’t help but notice just how feeble my grandparents have become.  Still, I can only hope to be as strong as they have been in character and determination.

It was 1944 when my grandmother was busy working in her garden on the little farm my grandparents had purchased.  Their first baby, my mother, was due that summer and my grandfather had just come home from the war for leave until the baby came.  For extra money, my grandfather, a pilot, taught flying lessons.  It seemed like a great idea until one of his students flew the plane into the ground.

My grandmother’s whole world crashed around her.  How did she have the strength at 20 years of age to handle being a widow while expecting a baby?

My mother came along, right on schedule.  Since my grandparents had already agreed to name a boy Junior, my mother was saddled with her father’s name (which is a whole different story).

Right after the accident, the grandfather I know arrived on the scene.  He loved my grandmother and wanted to take care of her.  Two years later, they were married – despite the protests from his family (this wasn’t the time or age where men married widows and took care of children not fathered by them).  They went on to have two more children, another girl and a boy.

Next month will mark their sixty-third anniversary.

We should be so lucky to be loved as they have loved each other.

Awww, that's such a cute story. My grandparents have been married 58 years now. They are so cute together, too, and although they're quite feeble (I think living far away and going back home makes it easier to notice a difference between visits), I admire their love and devotion to each other. Great story!

What a sweet story

i can't believe you have living grandparents! you are so lucky. i want to hear more about them, and about your mom's name!

So wonderful. I have only one left, and I'm afraid Alzheimers has taken most of her. Luckily that means she does not remember that the love of her life is gone.

I'm with Deb, out with the name story!

My heart fell into my stomach when I got to the part about the plane crash...

I want the name story too!

I agree with Deb- you are SO lucky to have living grandparents!! Wow! I am crazy jealous. I've been grandparent-less for 11 years now. :(

What a sweet love story. That is absolutely amazing. Heck, most people don't make it 6 years, let alone 63!!!

that one gave me a big smile...love stories are so cool...and we should be so lucky.

So bittersweet, Beth. Can't imagine your very young grandmother dealing with a newborn "way back when." Thank goodness your second grandfather came along and fell in love. Hard to believe they'll celebrate 63 years! I saw my great grandparents at their 50th and it was unbelievable.

BTW, how did it go with the little black dress and the fresh black eye?

That is so touching. My grandparents were married 51 years before my grandfather passed away. I once asked my grandmother if she was planned to ever remarry and she looked at me like I'd grown a second head - and one with horns, at that.

The answer was apparently a resounding "No."

What a nice love story for your grandmother.

Love this story... thank you for sharing....

I have one grandmother still alive. She just turned 94. She used to be a lot of fun and is slowly losing touch with us... Just not really in her body that much these days. I keep meaning to write about her. This great post is good inspiration.

Wow, you made me tear up and that usually doesn't happen here, lol.

This is a great story. Thank you for sharing.

The man who married your grandmother and her daughter who was named after her father knew the strength and beauty within your grandmother. Smart man to marry her and have more children with her. What was a very sad tale became a real life love story.

that is a beautiful story. lovely. i, too, am surprised everytime i see my grandparents at how feeble they are getting. i always had the "young" grandparents. but i know that i am lucky as all five of my children know their great-grandparents really well!

Loved this tribute Beth. My grandparents are all gone now... thanks for sharing yours.

What a beautiful love story. How wonderful that she found love 2 times even though it meant her enduring heart ache after the first. I am sure it made her really appreciate the love she found the 2nd time. Thanks for putting a big smile on my face this afternoon. I can only hope to be with my husband for that long!

What a sad and sweet story (all at the same time)!

That's a great life story with a few lesson attached to it. That it's part of your history makes it unique and special, I'm sure.

I'm glad your grandma bucked the tide of the times.

She is a whole other story too.

That was so sweet! I'm really glad your grandma found someone else to love after he died. that was sad!

Beautiful story! Yes, we should all be so lucky. Love that :-)

Fidgeting Gidget - I love when couples tough it out together!

Deb - They are the only living grandparents I've had since I was 8. I do think I'm lucky!

Em - Alzheimers is so sad! On a different note, I'll have to work up the name story.

K13 - No kidding! There aren't too many who make it together so long.

Jane - After I had kids, I really realized how difficult that must have been. As for the black eye, I just loaded up the eyemakeup on the opposite eye to try to match it. Not too many people noticed the bruise that way. Thanks for asking!

Sunil - Thanks! Welcome to my random thoughts.

Jan - I love that your grandmother knew she had been with her "one."

Michele - It is sweet. They like to argue but then they like to tell each other how much they love each other. It works for them.

Erin - Write about your grandmother! I think I've seen her in your family pictures. I'd love to hear her story.

Midwest Mommy - Sorry about the tears. I was reminded of their story this past weekend and I knew I needed to share it.

TechnoBabe - I never thought about how smart he was to marry her. It just seemed like destiny to me.

beth - I KNOW! It wasn't that long ago that I was in junior high and my grandmother was taking us to the beach. I do love that my children know their great-grandparents.

Pseudo - It always makes me sad to hear about people without grandparents.

Leslie - It had to have been hard to lose her first husband but I think it would have been even harder to not have had another chance at love.

Fragrant Liar - I agree. We've learned a lot from my grandparents. They don't make 'em like that anymore.

OMG - Roger. That is most unusual!

Michel - I'm glad she found someone else, too!

Kulio - I love a happy ending!

I hate it when other people protest over someone elses relationship. I think that it still happens a lot today.

Love the post. I have a huge soft spot in my heart for old married people, who are still in love.

Unfortunately I never knew any of my grandpa's. They both died before my parents were 18. My grandma's never remarried. My husband is lucky his grandma is still living. She is 80. My kids don't realize how lucky they are to have one living great grandma.

What a beautiful story!!!

Happy anniversary to them both.

I've got one grandparent left and I'm glad for every moment I get to spend with here. It's exciting because she's flying out to see us in November!

Thank you for sharing the story. It was very touching.

Nothing like a little sentimentality to kick off the weekend. Great story, Beth!

What a beautiful post. Life always goes on, but not usually in the way we plan.

I'd love to hear the story about your mom's name sometime. I bet it's good.

MHS and I have our 29th ann. on Sunday. I can't even imagine what it would be like to be married for 63 years. WOW

What an incredibly beautiful story. I'm glad you told us.

What a beautiful story!!

That is a great story.

I love reading your stories! :)

Wow- 63 years! That is an awesome story about your grandparents!