When I was growing up, we had a mailbox fastened to the house and a friendly mailman who walked the neighborhood with his canvas bag slung over his shoulder. He was a super nice guy who always spoke to us when he made his rounds. He even tried to teach me to whistle.

My mother always scrounged for money to leave him a tip at Christmas and the beginning of July.

These days, the mailmen (and women) only deliver mail in their dorky little mail trucks. And those mailboxes attached to the house are just reminders of days gone by.

But I don't mind walking out to the mailbox to gather the bills mail. It gives me the chance to practice whistling and annoying the cats from next door who view my yard as their litter box. 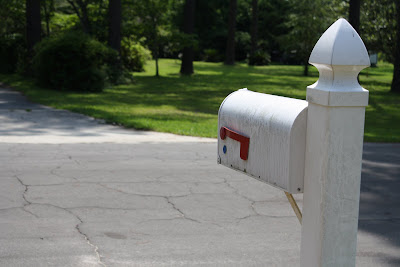 Yesterday, I received this little slip of paper in the mailbox. It was resting on top of the mail with no explanation. 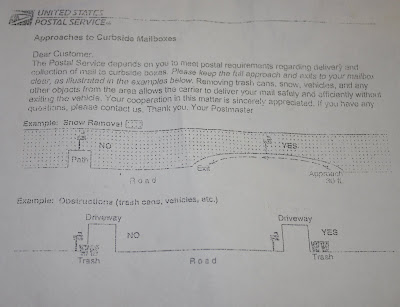 The first thought that crossed my mind was that my grumpy fatty, fatty two by four mailman was leaving us a thank you note for all the food we left by the mailbox during the recent food drive. I began to read the message. 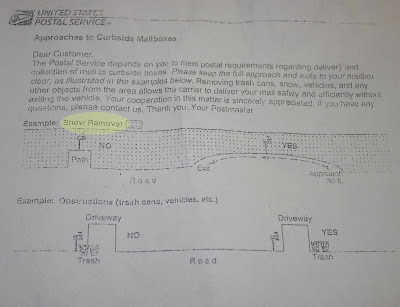 What the heck!? My idiot mailman is worried about me removing snow? We live in South Georgia. It doesn't snow here. And we are currently in the middle of a heatwave with the Heat Index hovering around 110 degrees. Does he know something about that place with the double hockey sticks freezing over? Should I be worried?

I continued reading and I didn't even ask for help with the big words. 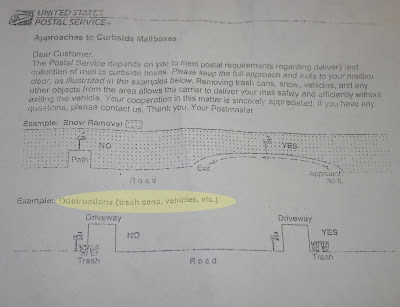 So, Mr. I'm So Darned Lazy I'd Rather Write 'Mailbox Blocked' And Deliver the Mail Another Day felt like it was time to leave a more official note. On a crappy overused copy with snow references even though we live in the armpit of the south where it doesn't snow. Because he isn't going to take the 3 steps from his truck on the road to the mailbox on the curb. What did he think would happen with 6 people in the house and 6 cars?

No wonder his voluminous hiney spills off the sides of the seat of his mail truck. 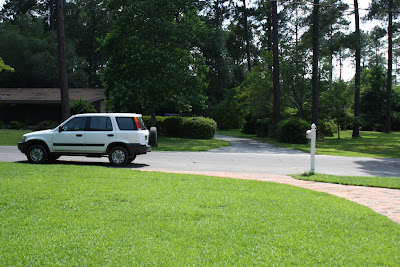 Does Mr. Funny's car look like it is too close to the mailbox? I think even a blind dude could figure this one out.

This year, the only tip he is getting from me is the suggestion to cut back on the Twinkies. 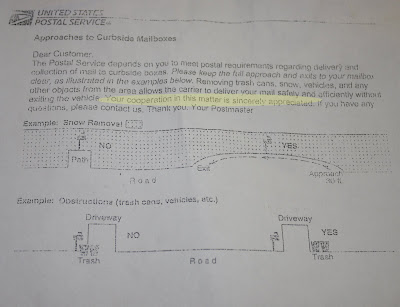 And now he wants my cooperation in this matter. In fact, he'd appreciate it.

I wonder how much he'd appreciate the thoughts in my head right now.

Labels: demented mailman, is he expecting a boy or a girl, that mail truck is attached to his butt

All I can say is WOW! They increased the stamped prices for THAT? How useless. How appropriate that as I was reading this, my maillady came. No bills! YAY just junk and a friendly reminder from my bank that if I don't put money that I don't have in my account, they will close it. SO helpful they are

Maybe he has Impaired Mobility Disorder.

I like your tip for him though, hopefully he will heed your advice. Next thing you know, though, he'll have the city lay out official "mailman approach lanes" on all streets.

But be careful. The phrase "going postal" did come from somewhere.

Who cares!! It's only bills.

Leave the car there a while to tick off the mailman even more. And...

We got a similar notice recently. Our mailbox is on our fence, now we need to put it on a post so he can reach it from his car. Fine, but when our old mailbox post rotted (this was right next to the fence post, not reachable by anyone in a car) I called the post office to make sure I could put it on our fence. I was told our route was a walking route and that was fine. Now, a year later, I have to put up a post. This is idiotic, but I'll do it. Our post man has also hit my husband's car once while people were watching, then denied it. He also nearly collided with my neighbor and then tried to blame her. I'm so not a fan of the postal service right now. (unless you're talking about the band The Postal Service, because those guys rock!)

shit dude! you can't take on a postman! Those guys are crazy! EVEN I KNOW THIS!

Just back away slowly and next time you see him, casually mention that you think Jane at Gaston Studios or Hit 40 stole your password and are trying to frame you.

PS i love your yard!

So that's where my mailman transferred to - your neighborhood. I had the same thing happen a few months ago but my goof of a mailman didn't leave a note or anything, just passed us by. The next day one of our envelopes had written on it "MAILBOX BLOCKED" or some other ridiculous-ness...he would have had to take 2 steps out of his truck to put the mail in the box. Heck if I where the mail deliverer I would rather get rid of the crap than have to haul it back to the office and then back out the next day - what a bunch of freakin' idiots they are!!!!

OMG majorly overpaid and always a pain in the butt. We get everybody else's mail but ours. Your yard is lovely..problem is he can't make that cute lil curve cuz his big round belly won't let him turn the steering wheel like that...What's that...Hell NO I don't speak from experience!!!

Michel man you threw Jane and Eileen under the mail truck..betta watch out Jane has been to some places and learn a few things or too and Eileen is right up there for smoting!

holy cow! that is crazy! my mailman still walks and is friendly and asks about my kids (when they are not standing at the door in diapers scaring the other neighborhood kids and him), but i don't have nay grass at all. in fact, i don't have a mailbox either, he just throws it in my front door. i guess that is the difference between living in the city and living in the suburbs. i think i would take a cranky mailman and your grass over a rowhome and a nice mailman.

I used to live at the end of a cul-de-sac where the snow plow was too lazy to plow the whole thing, so it all got pushed up against our driveway and mailbox, so we legitimately got one of those flyers for the snow blocking the mailman's truck access.

Your tax dollars hard at work...

Do prepare ahead in case it snows in the upcoming week.

Wow, that's effed up. Can deliver the notice, but not your bills?????

"This year, the only tip he is getting from me is the suggestion to cut back on the Twinkies."

Okay, this made me LMAO. And I needed it. Desperately.

You need to request more catalogs. Bury him with paper.

Well, I guess I don't need to tell you what you should have said, you pretty much said it all LOL!

He just likes the power.

Can you really trust a guy/girl who drives one of those funky little posty trucks all day? My guess is they are just effing with you. Right now, they are reading your stuff and laughing their asses off. "She totally fell for it!" Ahhh-ha-ha-ha-ha!

You want some snow? I can hook you up.

How frustrating!! Right now I need to go have a talk with my post office. I get 1/2 my netflix movies, and then netflix says they are returned to the post office because of a "wrong address"... uhmmm HELLO, you delivered a movie yesterday to me with the exact same address!

Anyways, I feel your pain, What the heck!

Do not even get me started! Snail mail will soon be extinct because of the lousy service and high prices. Take care.

LMAO!!! Your comments were great!!! I love the one about getting more catalogs. Great idea.

Put him on the ZONE diet! That'll teach his ass!

Am laughing out loud. We got a similarly strongly worded note from our recycling company. Then, they refused our recycling for a week until I "followed all the rules." Gah.

I'm just impressed that you've found a way to piss off the cats next door :)))

I'm with Braja. You must be a great whistler.

It's ok to tell him to lay off the Twinkies. Just don't forbid him to eat the cupcakes!!

Did you know that banks can no longer send checks in those little rectangular shaped boxes? Nope, the USPO told them they couldn't so now they send the checks in flat packages.

The USPO is trying to take over the world people, we've got to stop them!