Irregardless of your time, can we just take a minute to conversate?

Seriously, I try not to laugh out loud when 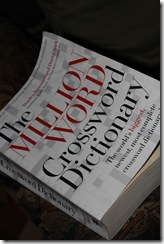 parents and teachers use words that aren’t really words. At least not yet. And by not yet, I mean they aren’t currently listed in the God of Dictionaries – the Merriam-Webster (I could be wrong on this one since I’m not super vigilant about attending services).

Relax. I’m not a language slob. Especially since *I*, the hearing impaired one, mispronounces words regularly. I do happen to have mad phonics skills but we aren’t here to discuss those outlaw words that defy the phonics police.

Once when meeting with a parent about their child’s behavior, the father sat up and loudly said, “We’ve done every thing we know to do. We’ve taken things away from her. We’ve spanked her. Why we even grounded her and the groundation didn’t work.”

Personally, I think it is a word that makes good sense. I just wish I saw it in the vocabulary of more parents these days.

**Update - Hilariously, I didn't mean to write slob instead of snob. Nor did I intend to use the wrong verb tense. I blame the Nyquil.

Labels: i know that irregardless and conversate really aren't words

Irregardless is one of my biggest pet peeves. Boooo.

i think i lived in groundation when i was a chillen.

I always use Bush's 'strategery'. People will stop and politely nod, but they aren't sure if you're serious or if you're quoting Bush or if you're being goofy.

I am loving the groundation! I love to make up words. I usually just use them with my family but I wonder how many times I slip:)

I am confident that my child thinks groundation is a real word.

OMG, when I saw your title, I thought, no . . . That can't be Beth! She wouldn't! She shouldn't! And I am now breathing a sigh of relief.

Irregardless is a huge peeve of mine too. Supposably, it's the worst mangling of a word, but maybe not . . .

my hubby can't stand irregardless. it is like nails on a chalkboard. my personal nemesis is "that's a whole nother such and such."

if i had a dollar for every time i was groundationed...

i have to admit...and i hate to admit it...that even though i was an english major in college and i am a freak about spelling and grammar, irregardless/regardless is just one of those words that won't "stick". i can NEVER seem to remember which one is a word and which one isn't.

I like to make up words, hubby and I sort of have our own language here in our little hippie house.

It seriously makes me want to go all irregardless on her fanny.

What bothers me are the words that I cannot spell! No matter how many times I write them, I just cannot remember how to spell them!

Ha!! Too funny! I can only imagine some of the words you must hear in your line of work..all of them not pretty either.

I make up words all the time! I slaughter the English language and enjoy it all the while!

Just reading this title made me laugh out loud, because I knew where you were going with this post. Part of the reason my brother thinks I should write a book is exactly what you wrote about. Some parents really have some creative use of language. I have a few more that get me, and a couple of the comments above touched on them (supposably and expecially are right up there with irregardless!)

so I thought irregardless and conversate were both fake words, but found them on webster.com, who knew? Not me, and I am a word/grammar geek myself.

Groundation is hilarious. I hate it when people try to sound intelligent by adding too many words to a sentence. Often, this begins by starting sentences with the extraneous phrase "I feel that" Ex. I feel that his groundation did not work and therefore, to which, I conversated to himself that I would take away his allowance.

I have always hated irregardless. Does it also count when people horribly pronounce something? I have a friend who won't say Baby Bjorn right - instead of Baby be-yorn, she pronounces it Baby BeJourn.

It's so darn cute that I can't correct her though.

I think Beloved has just fallen in love with you - he IS a grammar Nazi and loathes the use of "irregardless."

I a real regular groundator.

I love made up words. I wish I could think of one now.

The title of this post totally scared me, so whew! Although I love "groundation".

Groundation is brilliant! I know some students of mine that served some serious time in groundation.

Groundation is a perfectly cromulent word!

What? Groundation's not a real word?? Damn.

I'm still laughing. The things you must hear and see. How do you keep a straight face?

is that graduation but on land as opposed to the ocean or Mars?

I am a firm believer in creating a word when the situation calls for it. Just ask my kids.

That's a fabulous word and one I intend to use.

People Who Know Me Would Say: said...

"Groundation" is definitely a should be....

"Fundage" (money) is another one, don't you think??

I am totally a word maker upper and I love doing it since it sends certain people over the edge! And yes, I was a literacy teacher in a past life ;0

I love when parents try to sound smart.

Oh the joys of the English language. Words are so much simpler in Italian where it's perfectly acceptable to just slap together as many words as you like to get to what you really want to say. I've seen words more than 25 letters long...

You did this on purpose, right?

"Relax. I’m not a language slob. Especially since *I*, the hearing impaired one, mispronounces words regularly."

BZZZZ! Verb agreement problem. It should be "mispronounce", since the subject is "I".

You see, I AM a language slob.

Haha, everyone knows the correct word is groundification. ;)