I’m not sure where Mr. Strong developed such a hatred strong dislike for squirrels but if they had the right representation, he’d be accused of discrimination based on fur color breed.

I could probably distract him from his self-imposed mission of ridding the yard of squirrels if only Ms. Poopy would quit barking at them. All. The. Time. 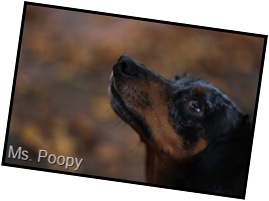 Despite a gimpy yapping dog and a crazed man with a BB gun, the squirrels have decided to set up camp and stay.  It was when the fourth squirrel’s nest showed up that Mr. Strong declared war.  First, he went to gather some ammunition cut down a huge bamboo pole. 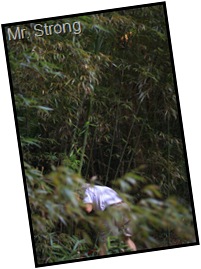 The bamboo pole was as longer than the truck and we had to shove it through the back window so I could hang onto it.  We were styling as we drove through town hurried home so Mr. Strong could begin the battle with the squirrels. 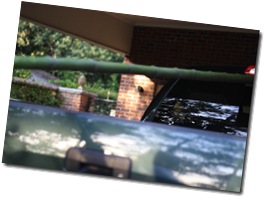 The game plan was to just mess up their nests that are strong enough to sustain hurricane force winds so that they’d move somewhere else. 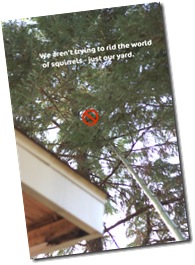 The bamboo pole was perfect for reaching the nests and stirring them up. 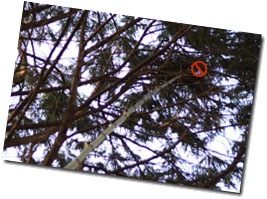 When ground fighting became too tiring, Mr. Strong took to the skies climbed up to the roof. 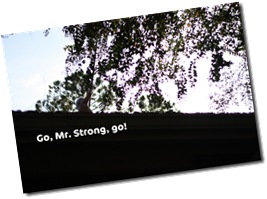 One squirrel went running after the Great Tree Shake Up of 2009.  I assume the rest will come home this evening to face devastation. 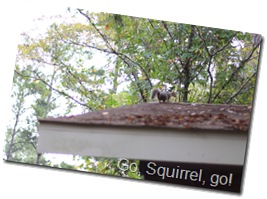 I do hope the squirrels will face facts and move on and so do the neighbors so they won’t have to listen to Ms. Poopy barking at them anymore.

Would it be wrong of me to leave some bird seed out there for homeless yard rats?

this is oh so timely since julie is learning all about animals preparing for hybernation, and so on...thanks for the visuals! :)

Wow! Mr. Strong is a tenacious little bugger isn't he? Tell him I am rooting for him!

My dad used to trap them and relocate them. It didn't even put a dent in the squirrel population in his yard. He has 3 pecan trees and has NEVER had one pecan in 13 years.

You do realize that if you were to shave a squirrels tail and dye it's hair black, that it would be a rat! Go Mr. Strong!!!! LOL!

My dad used to use a slingshot. Sadly for the squirrels, my dad is great with a slingshot.

squirrels i don't mind...all the deer eating anything (except the grass, which i would not mind if they did) that attempts to grow...i am running low on ammunition though...hmmm...

The man is on a mission. I've gotta give him that.

Best of luck getting rid of the vermin.

How funny! This must be a man-thing! The G-man has set traps (cage type), yelled at the squirrels, gotten out HIS BB gun to rid us of squirrels. They are here in his prized pecan trees and very shortly the squirrels will have eaten all the pecans (this happens every year & every year we have the battle). I say the poor dears are just trying to make a living.

Raccoons are even worse!! I hate raccoons. They broke into our house a year ago. I had to pay for some one to come trap them for me.

I have a neighbor who also likes to use his bb gun on the squirrels. Then, the other neighbor feeds the squirrels (PETA members) The PETA folks found out about the bb guy....

haha! I used to feed the squirrels outside of our house in Spokane! My dad finally gave in and started buying me peanuts to give them.

Now that I know they are rodents, I probably wouldn't, but they do have cute little hands....

Mrs. K - If only the squirrels would hibernate. Then we could off them in their sleep.

Otin - I have the visual now!

Comedy Goddess - I am totally getting the man a slingshot for Hanukkah this year! Great idea!

Candice - On a mission to say the least! The man doesn't sit still.

Lizzy - Maybe it is encoded on their DNA. Never thought of it before.

Hit 40 - Yikes to the raccoons! And let the PETA people come. I'm ready for them.

Michel - I've never looked at their hands. Squirrels are cute from a distance. Not so cute when you hear them in your attic.

Even though they are varmints, theya re cute, and they do occupy a position in God's food chain. Perhaps we should try birth control like they do on the deer?

Well, I hope he never decides to kick YOU out of the house and leave you homeless!

Watch out for the bamboo!

Oh No!!!! The squirrels are totally going to take over your yard now!!! I've often thought about taking on the raccoons, but I'm afraid of the raccoon invasion that I'm sure I'll start.

thank you for reinforcing my love for my house in the city with no grass, trees or even real wildlife near here. haha! good luck in your battle!

When your husband is done taking on your squirrels could you please send him here to get rid of ours? We have lots of big trees and accorns that they just love and they are so damn annoying. Good luck with getting rid of yours!

You can relocate them here! I love squirrels. We have a big back yard, huge oak tree and lotsa woods for them to play in. It's fun watching my dogs chase them too

Oh... perhaps Hit 40's neighbor lives too far away.... oh well, you could just throw the squirrel food in your own neighbor's yard anyway.

Mr. Strong is officially my hero - can I borrow him when he's done.

Years ago, I rented a place that was described as a converted barn. NOT. Anyway, what the owners failed to tell us (they went to Ojai) that squirrels mated in the rafters of this barn. Oh. My. God. Squirrel mating sounds are horrible. Then the little fuckers, oops I mean buggers, started digging, trying to get in the house.

One have-a-heart exterminator guy, 5 days and 13 squirrels captured and relocated. Where? Who knows and cares.

Mr. Strong is the best in my book.

All right, I'm getting a force ready to defend the squirrel population in your yard. Bamboo fighters. Those little guys are too cute. And they do have cute hands. And actually quite large huevos. It's a wonder some of those males can walk. Must be the females creating all the havoc.

squirrels are going crazy here - all you can hear is acorns being launched from trees...

One day squirrels will take over the world. I know that, Mr Strong knows that, and you, a teacher of all people, should know that!

I have had my own war with squirrels. They are rats that make me very angry. If you would like to read about my adventures with said rats, check out my post: http://myobyall.blogspot.com/2009/06/squirrel-circle-of-death.html
No longer an issue here.

Squirrels are kind of an odd choice for an enemy. Insects? Definitely. Mice or rats? Sure. Even rabbits if you're a gardener. But what do squirrels do?

Has your husband seen the YouTube video where the guy set up a slingshot to catapult the squirrels off his deck? My husband finds an endless amount of humor in that video.

leslie - I would love to try birth control. Unfortunately, I think the reproduce like rabbits.

A Mom on Spin - Good point!

Jules - You mean they'll take over more than they already have? I may need to move.

smiles4u - Sending him over as soon as this project is through. If it is ever through.

dizzblnd - Come visit and bring cages. I'll be glad to send them to you.

CatLadyLarew - Good idea! I'll put food in the neighbors on the right. They have 4 cats.

darsden - Right back at ya!

Fragrant Liar - They are messy vermin who steal the bird food and make the dog bark. They are lucky we aren't shooting them.

only a movie - Is there something about acorns we should know about?

Captain Dumbass - A Baby Ruth for you!

sAm - OMG! That is some serious arsenal. My husband was impressed!

A Free Man - The squirrels are yard rats. Vermin in the trees. They really don't bother me so much but the husband. He loses sleep over the critters.

carma - I LOVE that video! Hilarious!

Where I live, squirrels are practically the city mascot. There is such an overpopulation on the college campus it would be strange not to see them hanging out in plain view.

I did find one on my balcony trying to eat some of the plants. I don't think I've ever jumped that high. ha

This so reminds me of that first scene in Steel Magnolias with Tom Skerritt and the birds in his trees!